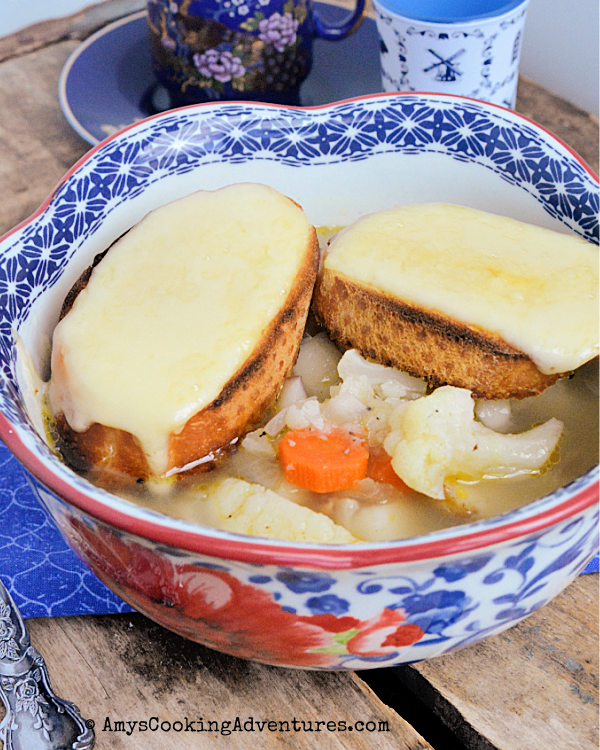 It’s time to travel the world, foodie-style with the Eat the World Recipe challenge hosted by Evelyn at CulturEatz.

This month, we’re traveling to the Netherlands. I’m embarrassed to admit that I didn’t realize that the Netherlands was the country and Holland was a province - I thought it was the other way around! Oops! But that’s why this group is so great - I get to learn about new countries (and their food) each month!

As I started looking for recipes, I found a ton of inspiration and really had to work to narrow down my choices! Eventually, I landed on a soup - we’re having unseasonably cold weather and a soup sounded just perfect!

The soup itself was super tasty - with cauliflower being an interesting ingredient that we all loved. We enjoy roasted cauliflower frequently, but never thought to put it in soup (other than the occasional blended cauliflower in a Skinny Baked Potato Soup (so the cauliflower does not take a prominent role)).

I didn’t realize, until I started cooking, that this was a vegetarian soup (other than the chicken broth, but that’s easily swapped out for a vegetarian option). I am making a mental note to make this tasty soup for Lent this year (It’s always great to have something I know the whole family will eat and enjoy!) However, for a heartier dish, I think it would also be delicious with some shredded chicken added in.

I was surprised as I read the recipe to see that the cheese was not mixed into the soup, but instead broiled onto toasts. The more authentic recipe enjoyed in the Netherlands uses boerenkaas cheese, an artisan type of gouda. Since that is not available here, I used gouda for the first time and loved it (gouda will end up on my shopping list a lot more often now).

Check out all the wonderful Dutch dishes prepared by fellow Eat the World members and share with #eattheworld.

A Day in the Life on the Farm: Hachee 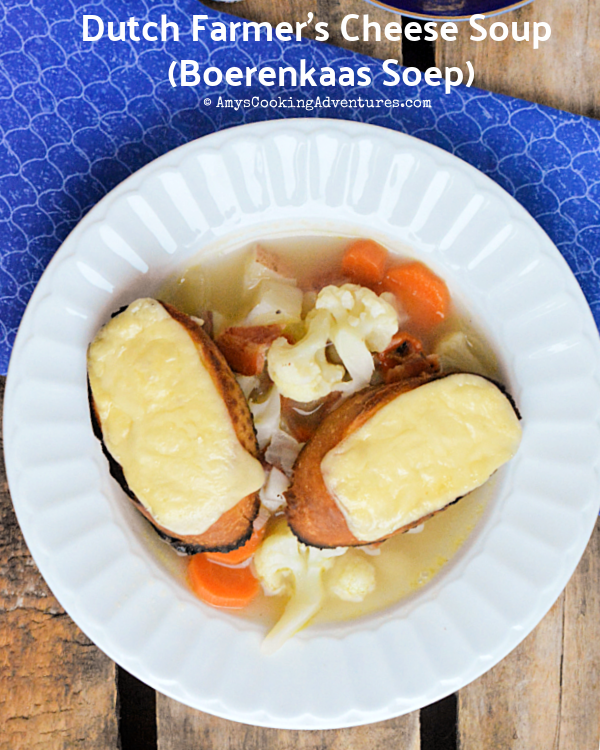 Heat the butter in a soup pot over medium heat. Add the onions and carrots and cook until the onions are starting to soften, about 5 minutes.

Stir in the potatoes, cauliflower, chicken broth and bay leaves. Season with salt & pepper. Bring to a boil, then reduce heat to a simmer.

Simmer for 20-30 minutes or until the potatoes are tender.

Meanwhile, butter the baguette slices on both sides with butter. Place under a broiler until lightly toasted. Flip, top with gouda, and broil for another few minutes or until the cheese is melted.

Ladle soup into bowls and top with cheese toasts to serve.