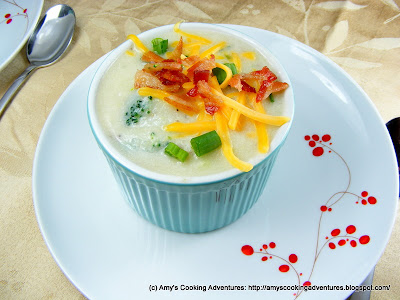 Are you sick of soup yet?  Just one last one (I promise (for now))!

Last week, I posted a recipe for Loaded Cheesy Potato Soup, and it was fabulous.  But would you believe me if I told you that I actually liked this lightened up baked potato soup even better?  That’s right, the low calorie version with more cauliflower than potato ranks a bit higher for me!  Even my husband enjoyed this soup.  In fact, he didn’t even notice the cauliflower before I told him about it (I think adding in the broccoli helps.) 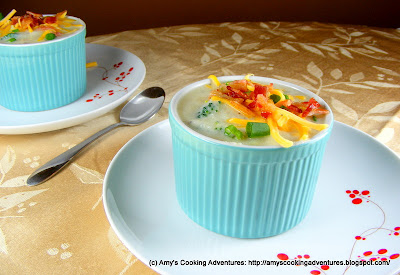 Recipe Notes:
*I don’t peel my potatoes before adding them to soup, because I love the extra nutrients found in the skin.
*As always, I used large red potatoes in my soup.  Use any potatoes you have on hand.

Turn the heat to medium and add the chicken broth, milk, potatoes, and half of the green onions to the cauliflower.  Bring the mixture to a boil, then use an immersion blender to puree until smooth.

Stir in the sour cream, broccoli, and salt and pepper to taste.  Simmer on low heat for 5 minutes, stirring occasionally.

Pour the soup into bowls and top with cheese, remaining onions, and bacon.