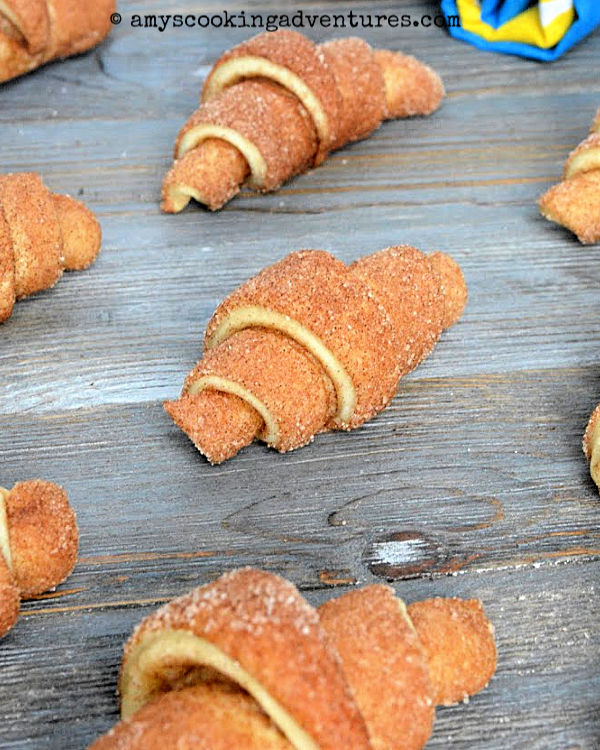 It’s time for this month’s Eat the World Recipe Challenge, and we’re headed to Ukraine!

More recently, I explored my own heritage as I shared my grandma’s Easter Bread recipe.  My grandma’s family identified as Germans from Russia as the immigrated to the US.  Given that her Easter bread shares many traits of Ukrainian Easter bread variants, it is likely that her family immigrated from Ukraine, which would have been a territory of Russia (or the Soviet Union) at the time.

For today’s recipe, I started with a simple google search for Ukrainian recipes, which led me to some unique looking cinnamon rolls (not the ones pictured here).  But the website was really low on details about the recipe and I had a lot of trouble verifying its authenticity as a Ukrainian dish.

By then, I had cinnamon rolls on the brain, altered my search and came up with Scuffles.  As I researched further, I realized that many of the recipes for scuffles I was finding were coming from Canadian blogs and realized that arts of Canada must have significant Ukrainian ancestry (I know in my area of the US, there are portions of the populace that can trace their heritage Germany (like my family) and Norway).

Then I remembered a book I read, Stolen Girl (sometimes known by the alternate title, Stolen Child) by Marsha Forchuk Skrypuch.  This middle grade (aimed toward 10-13 year olds) historical fiction novel is the companion book to the novel Making Bombs for Hilter by the same author.  These books follow a pair of Ukrainian sisters during World War II.  One sister is sent to a labor camp and ultimately ends up at a bomb making facility.  Throughout the novel, she wonders about the fate of her sister.

Her sister is first “adopted” by a German family, but when she’s not what they hoped for, she’s whisked away by the resistance into a refugee camp.  Eventually finding herself with a young Ukrainian couple fleeing to Canada and navigating her life there.

Now, I don’t believe Scuffles made an appearance in either book and indeed, the name, “Scuffle” may have been adopted in As I continued by research, I found that these likely originally went by the name Rohalyky (or perhaps with an alternate spelling) in Ukraine.  Why did the name change?  The internet is very hazy on the details and I haven’t been able to find the answer to that!

These little cinnamon crescent rolls were very different than other bread recipes I’ve made.  The most notable difference was the incorporation of the softened butter into the flour before adding the wet ingredients.  When rolling, it felt more like working with pie dough, than a yeasted bread dough.

The recipe really made quite a lot of scuffles.  In fact, I had to go to school early to volunteer in spud’s classroom the day I made these, and took half the batch to school with me to treat the students in spud’s class with a fresh from the oven afternoon treat!  The kids devoured the rolls and were beside themselves with happiness!

Check out all the wonderful Ukrainian dishes prepared by fellow Eat the World members and share with #eattheworld. 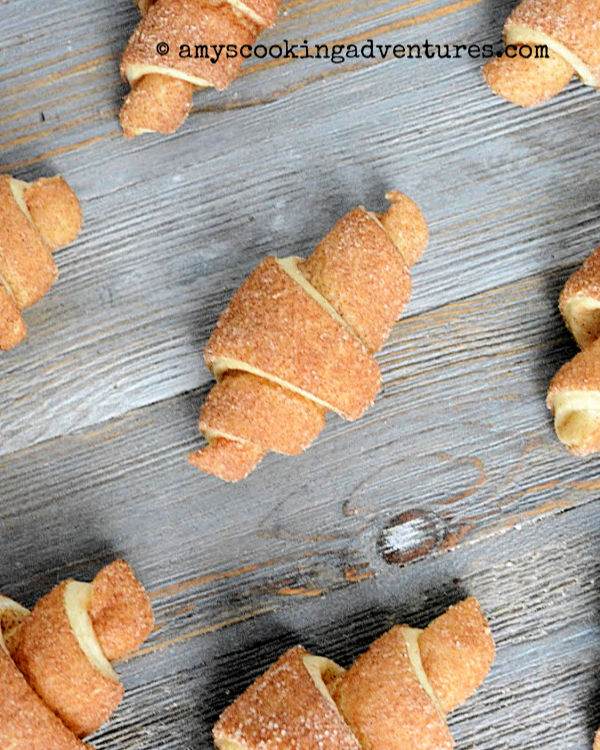 Ukrainian Scuffles or Rohalyky
Adapted slightly from Home for Dinner

Mix together the yeast and water in a medium-sized bowl.  Add a pinch of sugar, if desired.  Set aside until the yeast blooms and becomes foamy.  Whisk in the milk and eggs.

In a separate bowl, stir together the flour sugar, and salt.  Use your fingers to work the butter into the flour.  Pour the milk mixture into the flour mixture and Stir until combined.  Once it becomes to thick to stir, turn out onto a counter space and knead into a sticky ball.  If the dough is too wet, slowly knead in flour until a sticky ball is formed (the dough may stick to fingers when pressed, but you should be able to pinch off a small section and roll it into a loose dough ball between your fingers).

Wrap the dough and refrigerate overnight.

Preheat the oven to 350 degrees F and line baking sheets with parchment of silicone mats.

Stir together the sugar and cinnamon to make cinnamon sugar.

Divide the chilled dough into 6 equal pieces.  Work with dough pieces one at a time, returning unused dough to the refrigerator while you work.

Liberally sprinkle the work surface with cinnamon-sugar.  Place the dough in the middle and roll very thin (about the thickness of pie crust) with a floured rolling pin.

Use a pizza cutter to slice the dough round into 12 equal wedges.  Start at the base of each triangle to roll crescents.  Place the crescents onto the prepared baking sheet, making sure the tip of each crescent is on the bottom (or they’ll unroll while baking).

Bake in the preheated oven for 15 minutes, then cool slightly and serve. 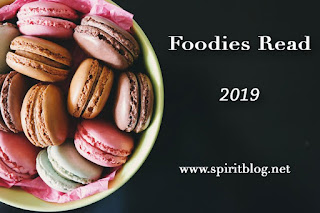