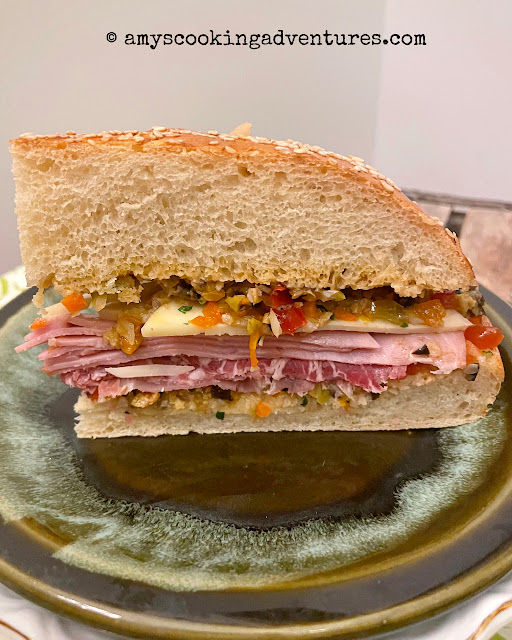 Lent is only a week and a half away (whaaaat?) which means Mardi Gras is also right around the corner!  Mardi Gras is traditionally celebrated in New Orleans the day before Ash Wednesday, sometimes called Fat Tuesday.  Historically, people would gouge on Fat Tuesday, using up their sugar and butter and things before fasting during the 40 days of Lent.

In some places this may still hold true, here, we usually give up something for Lent plus abstain from meat on Fridays.  I didn’t grow up celebrating Mardi Gras or Fat Tuesday, but since Mardi Gras is the Sunday Funday theme today, I was happy to delve into New Orleans cooking!

I wound up making the traditional muffuletta sandwich.  A muffuletta is made on a large muffuletta roll (typically only found in New Orleans) and loaded up with Italian meats and olive salad, then sliced into wedges for serving.

While putting the sandwich together for serving is a simple process, gathering all the pieces takes a bit more time.  This sandwich was intense enough that I split it into 3 separate recipes/blog posts: the olive salad, the bread, and the sandwich, because each was a standout on its own.

Once all the pieces came together, the muffuletta sandwich was fantastic!  Hubs loved it (even with the olive salad (he’s not big on olives)) since it reminded his of an Italian sandwich he orders at a chain sandwich shop.  Even the kids enjoyed their portions (though without the olive salad).

Slice the roll down the center.  Spread both sides liberally with olive salad (use more if needed).  Next, layer the meats and cheeses.  Place the top back on.  Serve immediately or wrap and refrigerate for 1-2 hours to let the flavors meld (it’s delicious both ways).