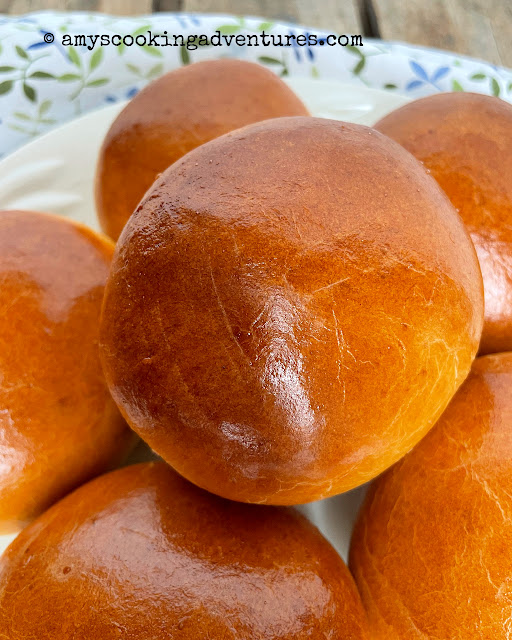 A while back, I made smash burgers as part of a Sunday Funday event.  As I researched, I realized that smash burgers are traditionally served on a brioche bun, so I decided to make those as well, thinking that I’d never made them before.

Imagine the facepalm as I went to post this recipe when I realized that I have made brioche buns before and even blogged them..

Well, here we are anyway, because those ones were onion brioche buns and these are regular.

Basically, brioche is an enriched bread that browns up beautifully and does pair wonderfully with burger patties.  Plus, if you don’t use the whole batch right away, these freeze well and you’ll always have brioche buns ready for your next cookout!

My butter was still cold, so I put it in the warmed half and half.  It ended up mostly melted by the time it was added to the dough

Place the water, yeast and sugar in the bowl of a stand mixer.  Stir to combine and set aside until foamy.

Add the remaining ingredients.  Mix until combined on the low with the paddle attachment.  Then switch to the dough hook and continue mixing on low for 10 minutes and until the dough is satiny.

Divide the dough into 8 equal pieces.  Shape each into a flattened ball and place on a parchment or silicone lined baking sheet.

Bake in the preheated oven for 12-15 minutes or until deeply browned.  Cool completely before cutting and using.