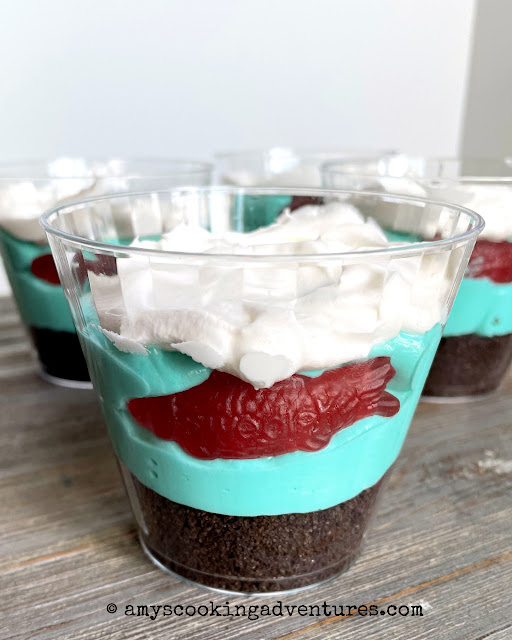 So, cute story about this one.

Spud has a beta fish named Prometheus.  Prometheus has had a tough go (seriously, I’ve never seen a fish want to die so badly, but we keep bringing him back from the brink).  Anyhow, Prometheus (somehow) made it to what Spud has deemed his first birthday (the day we brought him home - he decided it's close enough).  Spud, being the planner he is, decided that Prometheus needed a birthday cake.

Now, I’m a hobby cake decorator, so this is within my abilities.  But I know Spud always has something specific in mind, so I pressed him to tell me what kind of cake he wanted exactly.  Well, he actually didn’t know and didn’t like any of my ideas.

Eventually, he got thinking about Dirt Cake (or Worms in Dirt) because of the fish/worms correlation, but didn’t want that because worms made him think of fishing and fishing wasn’t right for Prometheus.

That was all I needed to get the creative juices flowing.  I decided to adapt the Dirt Cake recipe (slightly) , add some Swedish fish and make little fish cups!

Spud was happy, I assume Prometheus was thrilled, and we all enjoyed dessert.  But even if you don’t have a fish birthday in your house, you can totally enjoy these for shark week! 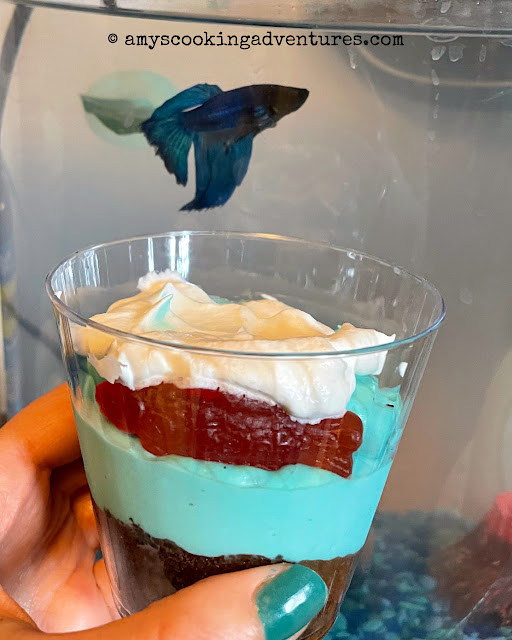 Place the cookies in a food processor.  Process until crushed, set aside.

Beat together the cream cheese, butter, sugar, and a couple drops of blue dye.  Use a spoon to gently fold in 6 ounces of Cool Whip.

In a separate bowl, stir together the pudding mix, milk, vanilla, and a couple drops of blue dye.  Use a spoon to fold the pudding mixture into the cream cheese mixture.

Place about ¼ cup of cookie crumbs in the bottom of 8 cups.  Place the filling into a large piping bag.  Pipe filling over the cookie crumbs, adding a fish halfway through and continue topping with filling.  Top with the remaining cool whip.