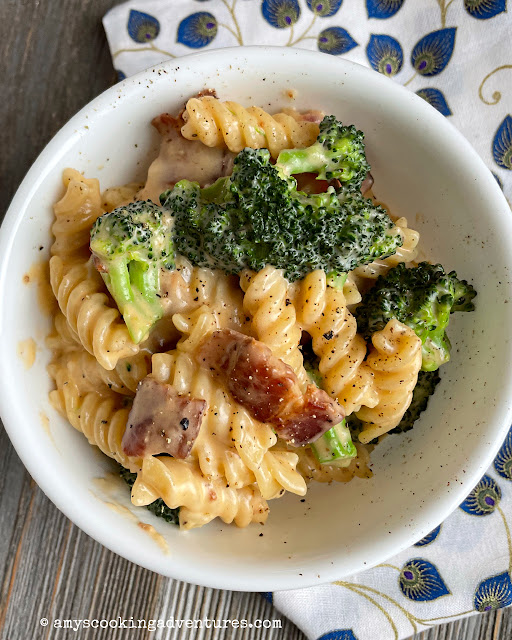 It’s Sunday Funday and today is all about the summertime favorite: picnics!

So what to bring to a picnic?  I’m a pretty simple gal when it comes to picnics: sandwiches (so many sandwiches), chips, and a portable fruit & veg..maybe a pasta salad if I’m feeling really ambitious.

So I thought back to the last potluck picnic I was invited to for the boys’ scout group.  I was surprised when I saw what each group was assigned…one group had chips, another fruit, another sides, and then our (very small) group was in charge of the main dish - say what?!? There was little communication that day, so I decided to make a double batch of bacon mac (based off my Creamy Stovetop Mac) and tossed it in the crock pot.  While there wasn’t a plug-in for the crock pot, since I had heated the crockpot for about an hour before the picnic, it was able to keep the mac warm until all were served!

Today’s recipe is an at-home version of the one I took to that picnic potluck.  I love cheesy broccoli, so the addition of broccoli to this dish is both tasty and fulfills a vegetable requirement!

Now when the kids request bacon mac, they generally get this version and eat it happily!

Ready for a picnic? Try these recipes:

1 pound dry pasta (such as rotini)

Cook the bacon in a large skillet until crisp.  Move the bacon to a paper-towel lined plate to drain.  Pour off all except 2 tablespoons of bacon drippings.

Turn heat to medium-low.  Whisk in the flour and cook for 1 minute  Slowly whisk in the milk, allowing the sauce to thicken between each addition.  Add the cream cheese and stir until melted.

Whisk in the salt, pepper, paprika, garlic, and onion powder.

Finally, whisk in the cheddar and stir until smooth and melted.

While the cheese sauce cooks, boil the pasta to al dente in a large pot of salted water according to package instructions.  Add the broccoli for the last 4 minutes of cooking.

Drain the pasta and return to the pot.  Stir in the bacon and cheese sauce.  Stir until combined and serve.