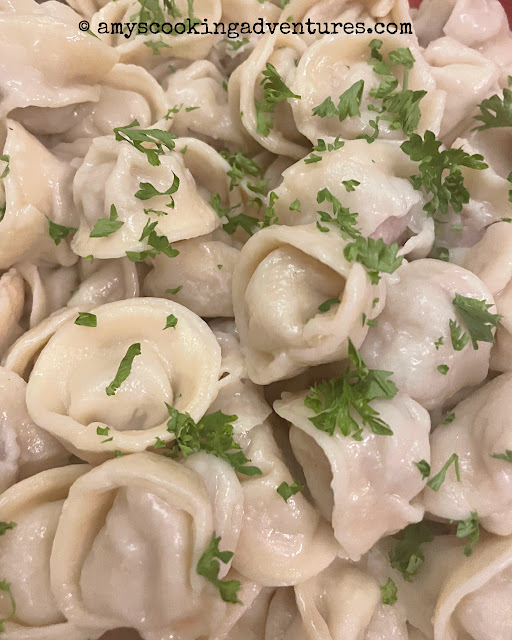 It’s time for this month’s Cook the Books Club! This month, we read Red Sparrow.  I was excited by the premise, well, at least what I skimmed: spy novel plus recipes. Sweet, right?

This was a Russian spy novel with gore, half-baked foodie scenes,  and bedroom scenes that were more uncomfortable than steamy.  And the recipes? More like rushed recipe instructions with no ingredient amounts.

Red Sparrow by Jason Matthews My rating: 2 of 5 stars

When I saw my book club's description of the book: spy novel + recipes, I was intrigued.

Then I started reading...and wow. I twas not what I expected.

It is most definitely a spy novel complete with the violence (explicitly described) and that seduction mentioned in
the synopsis (again, leaving nothing to the imagination and leaving one feeling like they need a shower).

At the end fo each chapter is there is a "recipe", if that's what you want to call it. Really, a food scene enters into
each chapter (sometimes seamlessly, sometimes forced), then a "recipe" for the food is plopped at the end of the
chapter. However, I wouldn't call these recipes unless a couple sentences of poorly written cooking directions count
as a recipe -Here's my own example (not from the text) take some onions, fry them in butter, serve them over
noodles. It's silly and out of place really.

As for the spy novel itself, I found myself bored half-way through. It was pretty obvious how things were going to
play out, but I has to slog through the rest to get there.

Of course, this is book one of a trilogy, and everything isn't quite wrapped up at the end, yet I have no intention
of picking up the sequel.

Nevertheless, I persevered through the surprisingly predictable text only to be led into a partial resolution that leads into the sequel (I’m not planning to check that one out).

Despite all this, I did have several food references written down to try.  As I read the “recipes” from the novel, I would google the ones I found interesting to see if they were something I would actually consider making.

In the end, I settled on Pelmeni.  In the novel, the two main characters are meeting an important higher-up and the Russian (Dominika) notes that in her culture, it is customary to make a dish to share when someone important comes over for a meeting.  She makes Pelmeni and that’s what I made too.

In my research, I found that people typically make a gigantic batch of Pelmeni and it seems to be a family affair.  I totally get it.  As with any stuffed pastas that are made by hand, Pelmeni are incredibly time consuming.  The recipe below fed my family (me, Hubs, a teen, & a tween) 1 dinner with a small portion leftover for lunch the next day.  A lot of effort for one meal.

But what a meal!  Pelmeni were adored by all (even if the kids passed on the sour cream!) 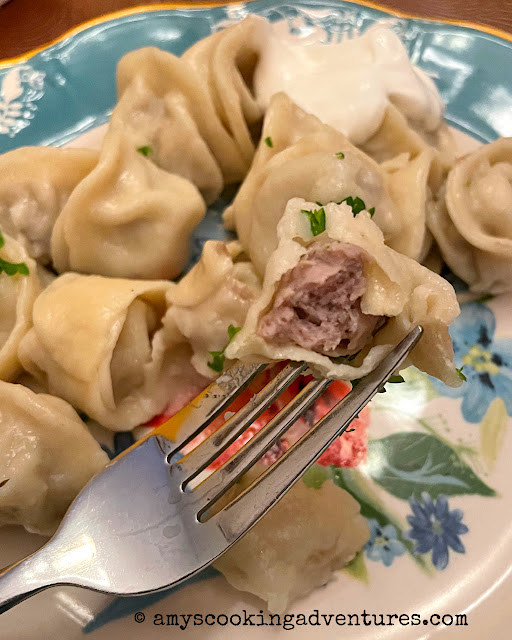 Adapted from The Kitchn’

Place the dough ingredients into a food processor fitted with the dough blade and mix until combined.  Turn out the dough and knead until smooth.  Wrap with plastic wrap and refrigerate for 30 minutes.

Meanwhile, mix together the filling ingredients.

Next, roll out the rested dough.  I used a pasta roller and rolled mine to the second thinnest setting (5 of 6).

To cook Pelmeni, bring a large pot of salted water to a boil.  Add the Pelmeni and cook for 5-6 minutes or until the Pelmeni float.  Drain and mix with butter.  Serve topped with parsley and a dollop of sour cream.