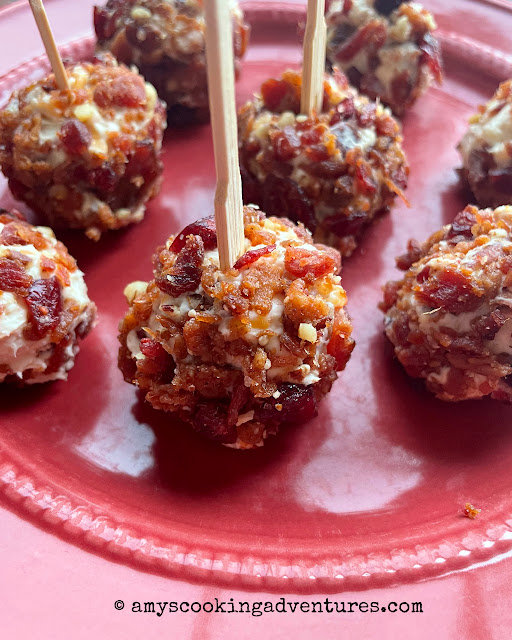 Today’s recipe theme is “something on a stick”.  That was a perplexing one for me.  I thought of cake pops, but I loathe making cake pops so those were out.

I thought of kebabs, but I prefer to grill those and when I was planning for this, my grill was still under 3 feet of snow and the temperatures were below zero.

I thought of popsicles, but those are another summertime thing and my kids have shown in the past that they have no interest in homemade popsicles whatsoever.

I’ve made Tortellini Skewers, Pancake Stackers, and even a Bloody Mary with a Mini Cheeseburger on a Stick (yes, really).

Then I was making my Stuffed Celery.  And I got really tired of stuffing celery (plus the celery sticks were getting smaller and smaller as I worked to the center of the bunch).

Finally, I realized that the stuffed celery filling was basically a cheeseball.  And how convenient would it be to make Mini Cheeseballs on a Stick as the perfect party appetizer and a two-for-one to boot?!?

I took that leftover filling and rolled it in bacon bits, added a stick and away we went!  Stick them on a cracker and you have a great (and easy) appetizer!

Something On A Stick:

Bacon Mini Cheeseballs on a Stick

Stir together the remaining ingredients (reserving half the bacon pieces), adding milk as needed to thin the mixture enough to stir.   Scoop 1-teaspoon balls of cream cheese mixture and roll through the remaining bacon pieces.  Cover and refrigerate for 1-hour to allow the flavors to meld.  Serve cold with crackers.