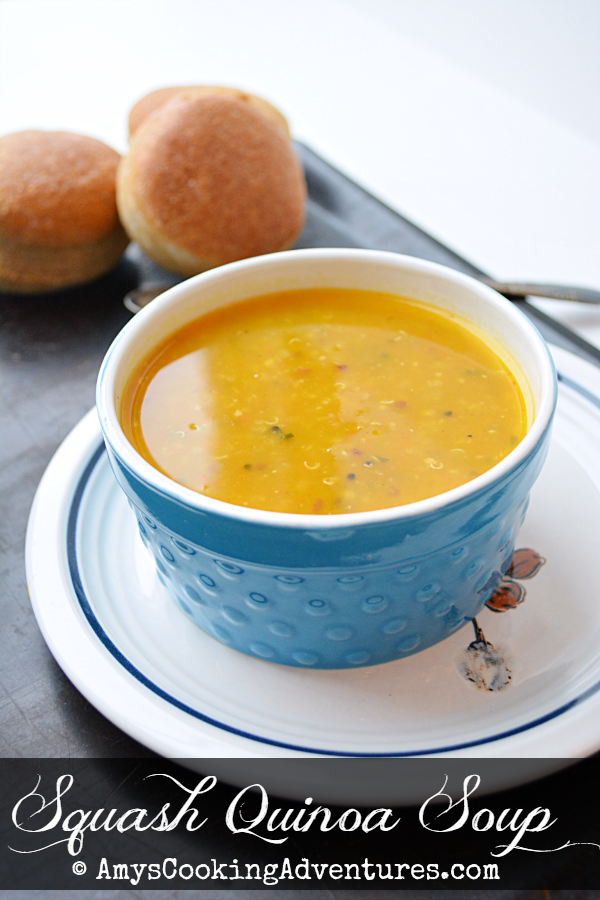 It’s time for Kid’s in the Kitchen again today!  Dude is on Christmas break from school, so he was excited to have some time to cook!

He looked through his cookbook and found a recipe titled “Almost Any Vegetable Soup”.  It left the actually composition of the soup up to the young chef, but essentially it was a squash soup.

I was awfully skeptical.  I knew the Hubs and I would enjoy the soup, but Dude?  It’s not really his thing.  But he insisted that he would like squash soup, so we got cooking!  We had a buttercup left over from our garden harvest, so it was fun to use a pantry item we had grown ourselves.

We also added some quinoa to the soup to give it a little texture, fiber and protein.  It was an awesome addition!

In the end, Dude worked his way through about half a bowl of soup, laden heavily with parmesan and crackers and quickly said “no thank you” to leftovers.  While I don’t think he actually liked his soup all that much, I am proud of him for sticking to it and eating what he made.

Plus, Hubs and I thought it was amazing and were thrilled to eat up all of the leftovers!

Now here’s Dude talking about the recipe in his own words:

It is delicious!    I decided it because I thought it would taste good and it looked   yummy in the cookbook!    A sprinkle of parmesan and a freshly baked bun are highly recommended! Heat the olive oil in a large skillet over medium heat.  Add the onion, carrot, celery, zucchini, potato, garlic, squash and salt & pepper to taste.  Stir and cook for 10 minutes or until the onions are tender.

Add the chicken or vegetable stock, sage, and rosemary.  Bring to a boil, then cover and reduce heat to a simmer.  Simmer for 15-20 minutes or until the squash and potatoes are very tender.

Meanwhile, remove 1 cup of the cooking liquid from the soup and place it in a small saucepan.  Rinse and drain the quinoa and add to the saucepan.  Bring the pot to a boil, then cover and reduce heat to a simmer.  Cook for 10-15 minutes or until the liquid is absorbed and quinoa is fluffy.

Once the soup is ready, remove from heat and puree with an immersion blender.  Stir in the cooked quinoa and parmesan.  Taste and add additional salt and pepper, if desired.  Heat through and serve.