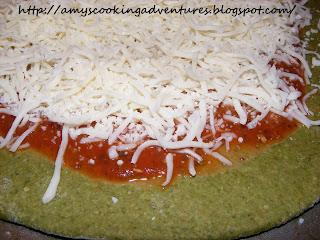 Since I discovered that I could put pumpkin and beets into my pizza dough, I have been a bit crazed trying to figure out what else I could add to me pizza dough.  So, next on the list was spinach! 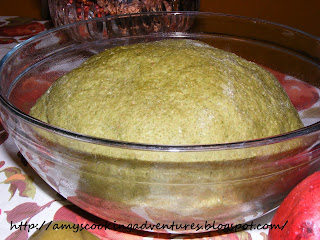 The bright green dough was very fun to make.  I do have to warn you though; there was a slight spinach-y aftertaste to this one.  But, if you like spinach (or if you already had spinach as a topping) it’s really not an issue.  The nice part about this dough is that, despite the spinach taste, it packs a nutritional punch and kids are so psyched about the green crust that they will eat it anyway!` 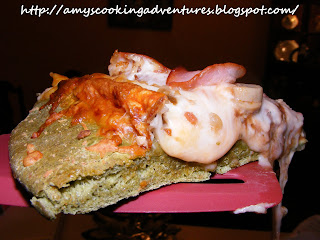 Green Pizza
An Amy Original
½ cup warm water (105-115 degrees)
½ tbsp active dry yeast
1 tsp honey
½ cup pureed spinach (directions follow)
½ cup ground flax seed
1 cup whole wheat flour
2 cups unbleached all purpose flour
1 tsp salt
2 tbsp extra virgin olive oil
Spinach Puree
1 (10 oz) box frozen spinach
Microwave spinach as directed on packaging (8-10 minutes).  Blend in a food processor until very smooth (adding 2 tbsp water if necessary).
This will make about 1 ½ cups of spinach puree.  Freeze the remaining spinach in ½ cup packages.  Use in future pizzas or in place of green puree.
Pizza Dough
Mix yeast and honey into the warm water.  Cover with a damp cloth for 5 minutes until yeast is foamy.
Mix yeast spinach puree, salt, olive oil, flax, and flours in a large bowl.  Turn out onto a lightly floured surface and knead until all the flour is incorporated and dough is smooth and no longer sticky.
Spray a bowl with cooking spray.  Place dough in bowl and turn to coat.  Cover with a damp cloth and put in a warm, draft free place to rise.  Let the dough raise until it is doubled in size, about 1 hour.
Punch down dough.  Split into two halves.  Roll each half into 12-inch circles.  Cover with sauce and your favorite toppings*.
Place dough onto pizza pans or baking sheets and cook at 450 degrees for about 15 minutes or until crust is browned and cheese is melted.
Enjoy!