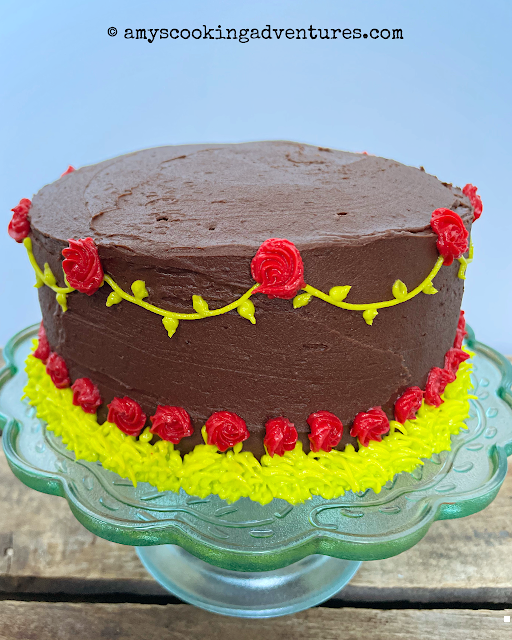 Is there any better way to celebrate the beginning to summer than a simple floral cake?

It was awhile back, but you may recognize that color palate from the same crazy baking weekend as the Softball/Basketball Combo Cake and the Bunny Cupcakes.

So here’s how that worked.  First I had the Softball/Basketball cake, which was requested to be half chocolate, half vanilla.  Originally, I contemplated adjusting half a vanilla cake to make the chocolate cake, but that’s never quite the same.

Then a totally different snafu occurred and a cupcake order got rescheduled to the same weekend.  It was perfect!  The cupcake order was a small order (just 12), so I was able to use the other half of the vanilla cake for those.

Then I was just left with a half recipe of chocolate cake.  This did not make my family sad.  Chocolate cake with chocolate frosting is our absolute favorite, so I decided to keep it for home.

Since the other two creations were for other people, I made those first and only used leftover frosting on this one.  I had a small batch of chocolate frosting I used as filling on the cake, plus the green and red from the softball side (you’ll also see those colors on the bunny cupcakes).

Sure, I could’ve just frosted the cake with chocolate and left it at that, but I’m not one to leave a cake undecorated, especially if there's a little frosting hanging around!

Once the other two creations were delivered, the kids inquired about this one and I jokingly said it was my birthday cake (my birthday was 3 weeks prior to this - it was a crazy busy week and Hubs was out of town, so I skipped the birthday cake and splurged on dessert when the kids and I went out for dinner instead).

Well, that was that.  The kids found candles and they and Hubs sang happy birthday, 3 weeks late! Haha!  It was adorable - and the cake was great, because it was my favorite flavors!