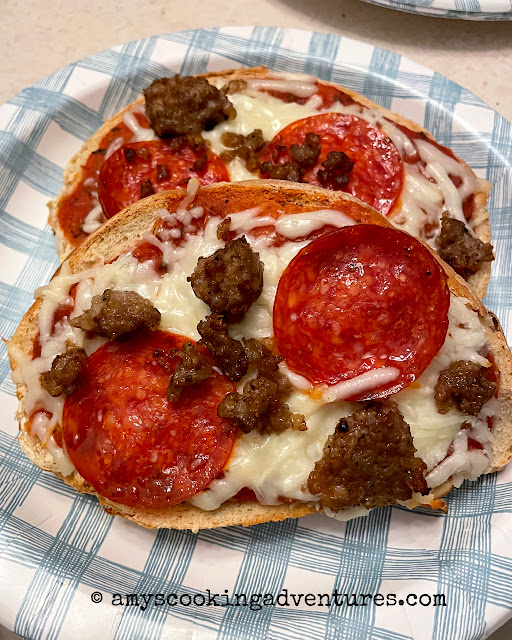 When Hubs and I were first dating, the first meal he ever cooked for me was pizza bread.

For pizza bread, he’d buy a loaf of French bread at the store, split it in half and load up the sauce, cheese, and pepperoni.  And I do mean load it up!  After a quick bake, pizza bread was ready to go.

After we were married, he’d still occasionally make his specialty, but in the past few years, we just haven’t.  Maybe because I make my own bread now or maybe because life has just gotten busy.

Anyway, I was reminiscing about pizza bread the other day and my kids had no idea what I was talking about.

I started to describe it and decided that I’d make it the next day.

Then Spud offered a suggestion.  He thought pizza bread sounded fine, but it would be even better if it was garlic toast.  His brother perked right up at that suggestion and here we are today.

Because I do make my own bread now, I started with a load of homemade Italian bread and made the garlic toast myself.  After that, the pizzas were just as easy to make as before - and delicious - Spud was right, the garlic toast was a great touch! 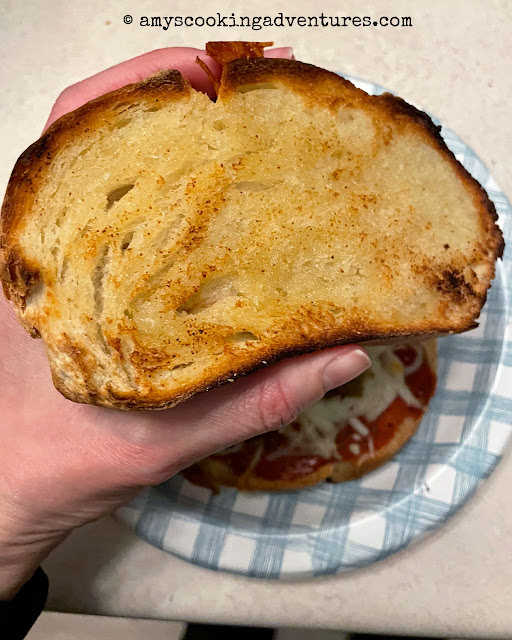 Butter both sides of the bread.  Sprinkle garlic powder on the top side.  Place in the oven under the broiler until toasted.  Flip, and broil until toasted on the other side.

Top the toasts with pizza sauce followed by pepperoni, mozzarella, and sausage.

Preheat oven to 400 degrees F and bake for 5-10 minutes or until the cheese is melted.  Serve immediately.