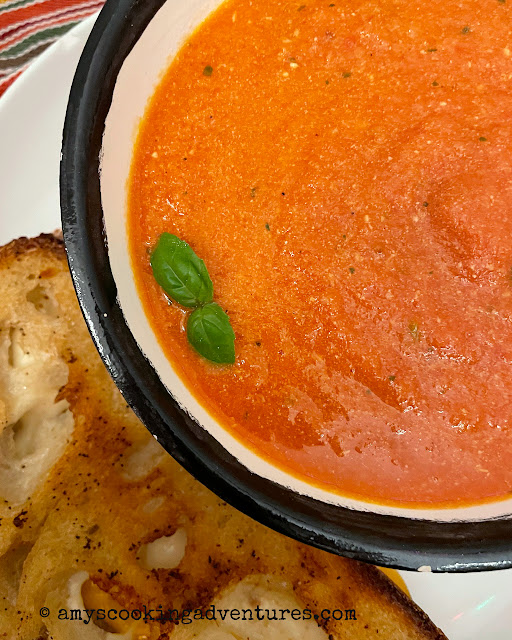 Let me set you a scene…

It’s the day after Christmas.  The past few days have been a whirlwind of Christmas cheer and baking.  We sang Christmas carols while we rang bells for charity, sang for Christmas mass (twice), opened presents, and watched Christmas movies.

Plus, we invited friends over for Christmas dinner: Chicken Alfredo with Homemade Fettuccine, homemade bead made into garlic toast, with a Yule Log for dessert.

And in case that wasn’t enough, I also ventured into sourdough land again since my mom requested a loaf so she could make an appetizer when we drove up to visit after Christmas.

Now we’re back to the morning after Christmas - none of us were packed and a winter storm that I thought was going to be a couple of inches of snow was looking a lot more serious.  I talked to my mom who mentioned she was fighting a cold, we packed as quickly as we could, and headed down the road.

Halfway into our 4 hour drive the storm got bad.  Like zero visibility, can’t see the car in front of you, 40 mile per hour wind bad…and night was about to fall.  We called home to touch base and found out that my mom’s cold was sounding a lot more like the flu.

And we made the difficult decision to turn the car around and head home.  It was good we did, because shortly after that, the interstates were closed and we heard a report of a bad accident where we were headed.

And so, I was home in a winter storm that came our way too (and dropped 15 inches of snow) and no meals plans for the week, and some sourdough bread.

I remembered a recipe I wanted to try for this month’s Cook the Books Club.  This month’s book was a cookbook/memoir: Midnight Chicken & Other Recipes Worth Living For by Ella Risbridger.

Here is my review:

Midnight Chicken: & Other Recipes Worth Living For by Ella Risbridger
My rating: 3 of 5 stars

This book was an interesting combination of cookbook and memoir. The format is certainly cookbook, but each recipe is preceded by a short story as the author explains her own history, how she came up with a recipe, or why it is important to her her.

The author was also very candid about her own mental health and how cooking helped her overcome her depression and move past her inner demons.

Overall, I felt myself wishing for a bit more. Often, I would be hooked into a story, wondering who exactly the Tall Man was to her (friend, boyfriend, husband?) or what happened with her relationship to her dad's entire side of the family. I'm looking forward to trying a recipe of two.

Though the book wasn’t entirely my cup of tea (it left me feeling melancholy), I did find the concept intriguing and several recipes I wanted to try including Roasted Tomato & Garlic Soup.  I didn’t want to drive through unplowed streets, so Hubs was wonderful enough to take me on a “date” to the grocery store as my chauffeur to grab fresh tomatoes for this recipe.

Since it’s December, the tomatoes I was able to find were merely “ok”, so I took a few liberties with the recipe.  I added some canned tomatoes to add vibrancy (yes, I know it seems counterintuitive, but it is December in the North, and canned tomatoes can make a difference here).  I also added half & half for creaminess and a parmesan rind I had leftover from that Christmas Alfredo.  Then, I  used the roasted garlic to make an amazing pesto (I just got my indoor Aerogarden going again, so I had just enough fresh basil to add fresh herbs to the soup).  Even better, I used that sourdough to make some amazing grilled cheese to go along with the soup!

If I learned anything from reading Midnight Chicken, it’s that one should make foods that make you happy or at least at peace and with the ingredients you have on hand. I served the soup in my Harry Potter "bowl who lived" bowl, since it seems apt.

I would have rather been with family, but this soup helped ease the disappointment on a stormy day. 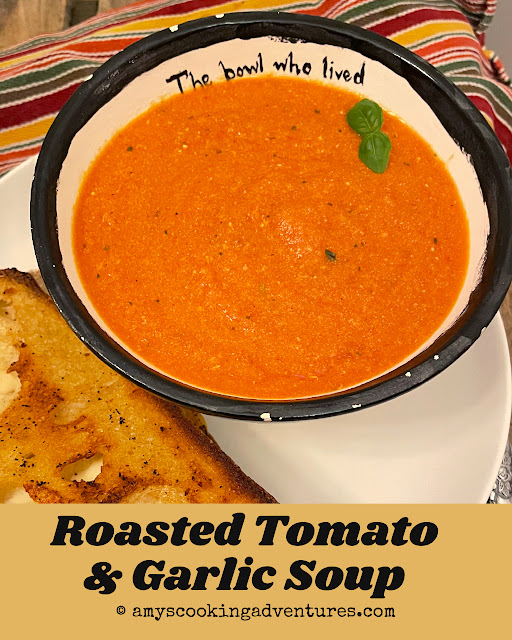 (Garlic from above, see cooking instructions)

Remove the garlic and set aside to cool.  Stir the balsamic vinegar into the tomatoes and continue cooking for another 20 minutes or until the tops of the tomatoes just begin to brown; the rest will be very soupy.

Meanwhile, once the garlic is cool enough to handle, squeeze the soft cloves out of the skins into the bowl of a mini food processor.  Add the  basil, pecans, parmesan, and olive oil and whirr to mix.  Set aside.

Once the tomatoes are just beginning to brown, move the soup from the oven to the stove top.  Stir in the parmesan rind (optional), crushed tomatoes and roasted garlic pesto.

Simmer for 5-10 minutes, then remove from heat and blend with an immersion blender until smooth.  Stir in the half & half and season with salt & pepper.  Heat through and serve, preferably with a side of sourdough grilled cheese.