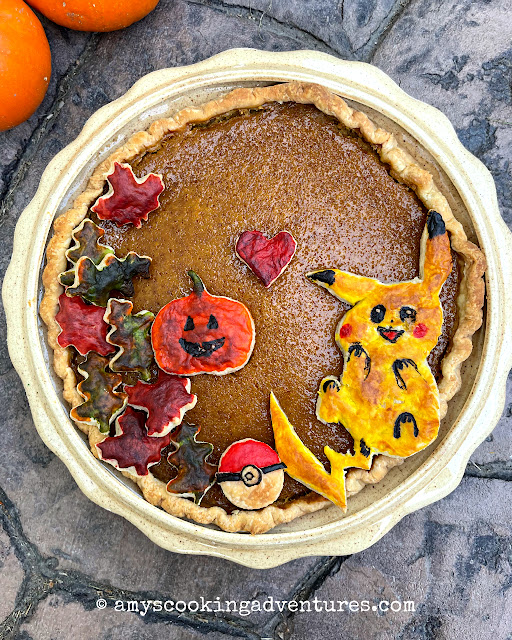 As a cake decorator, I make a lot of things that could be categorized as “kawaii” but I wanted to stay true to the Japanese part of things.  So for me, the obvious answer was Pokemon.

As a second grader, Spud was huge into Pokemon and insisted I download and play Pokemon Go.  Three years later, as a fifth grader, he still likes Pokemon, but it’s not as “cool”, so he’s on to other things.  I, however, am totally into Pokemon Go at this point and there’s no turning back.

So I definitely wanted to pokemon something and Spud has been begging for pumpkin pie, so I decided that would be my vessel.  I was going to choose a different Pokemon character, but Spud was insistent on his favorite: pikachu.  We’ve made a Pikachu pie once before and I just realized, as I was writing that I shared that pie on Instagram but not the blog - that particular pie has a fun story, so stay tuned, that pie will get its turn!

For this pie, I hand cut a Pikachu then surrounded him with a fall scene. Look how happy he is to get that pumpkin! Kawaii!

For this pie, the cut outs were painted before baking, then cooked separately from the main pie until the last 5 minutes.

This thing I love about this pumpkin pie recipe is that it does not rely on canned milk of any sort.  Instead, it uses heavy cream and yields the silkiest pumpkin pie I’ve ever tasted.  Plus, any leftover heavy cream can be whipped into a whipped cream topping! 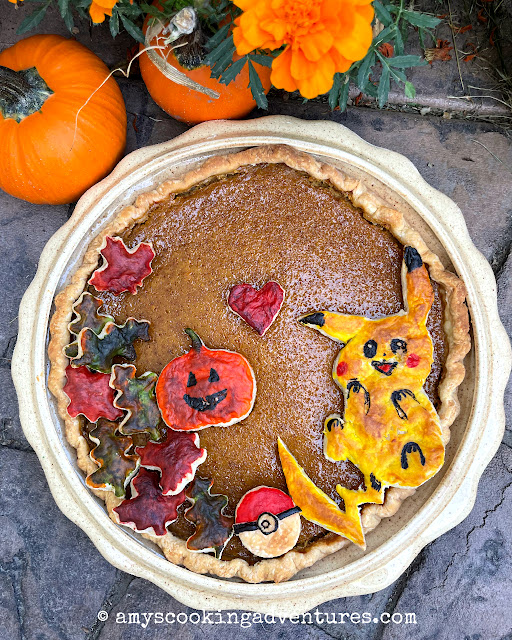 Preheat oven to 375 degrees F and make the pie dough.  Roll out half the dough and place into the pie plate, crimping the edges as desired.

Gently line the crust with foil and fill with pie weights or dried beans.  Parbake crust for 15 minutes, then remove the foil and pie weights and bake for an additional 5 minutes.  Set aside to cool slightly.

Whisk together the pie ingredients and pour into the prepared pie crust. Bake pie for 40-50 minutes or until the edges are set but the center is just barely jiggly.

Meanwhile, use cookie cutters of a paring knife to cut designs out of the remaining pie crust.  Mix food dye with a few drops of milk and use food dedicated paint brushes to paint the cutouts.

10 minutes before the pie is down, place the cutouts on a baking sheet and cook for 5 minutes.  Carefully transfer the cutouts to the pie and bake for an additional 5 minutes.  Remove from the oven and cool before enjoying.

Pumpkin pie is best served the day it’s made.  Cover and refrigerate leftovers.