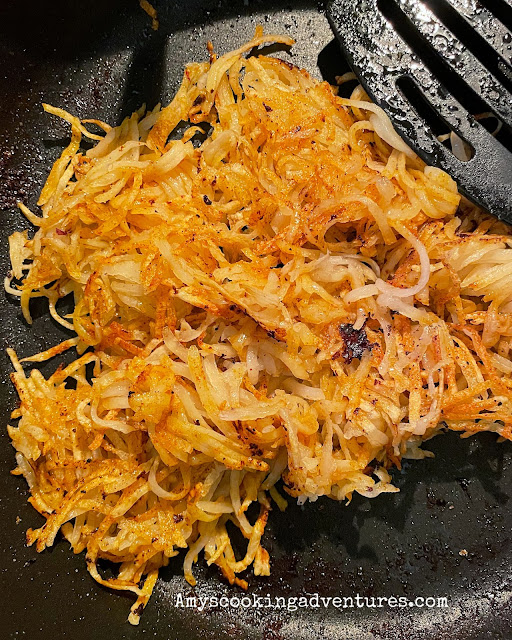 Today’s recipe is another bucket lister.  I don’t necessarily keep a written bucket list or recipes, but every once in a while, an opportunity will present itself and I think to myself, “I’ve always wanted to try to make that!”

The Eggs Benedict (and poached egg) from a few weeks ago also would’ve qualified as bucket listers under that criteria.

I often make breakfast for dinner and Dude’s absolute favorite side dish is shredded hash browns. In the past, I’ve always bought the frozen ones, but I don’t always have them on hand.

Anyway, I was serving breakfast for dinner and the recipe I was making (watch for it on Sunday!) didn’t originally call for hash browns, but I realized that they would be a great addition.  The problem was that I didn’t have hash browns on hand nor did I have time to run to the store.

And since fortune favors the bold, I decided that I would finally give homemade hash browns a try.

The fussiest step was definitely squeezing the excess water out of the shredded potatoes, but that step wasn’t as time consuming as I thought it might be.

As far as flavor goes, the homemade version was just like the frozen version.  Texture-wise, they were a bit crunchier.

Will I switch to homemade all the time?  I’m not sure, I’m going to check the ingredient list on the frozen ones next time I’m in the frozen food aisle and decide from there!

Shred the potatoes in the largest hole of a cheese grater (I used the grater blade on my food processor to make swift work of this.)

Scoop the shredded potatoes into a cheese cloth and squeeze as much moisture as possible out.

Layer paper towels on a plate.  Place an even layer of shredded potatoes on the prepared plate and microwave on high for 2-3 minutes.

Meanwhile, heat the bacon drippings and butter in a large skillet over medium heat.   Remove the shredded potatoes from the towel lined plate and place them in the hot fat.  Season generously with seasoning salt.  Fry for 5-7 minutes or until deeply browned, then flip and fry for another 5 minutes or until the second side is browned as well.   Serve immediately.