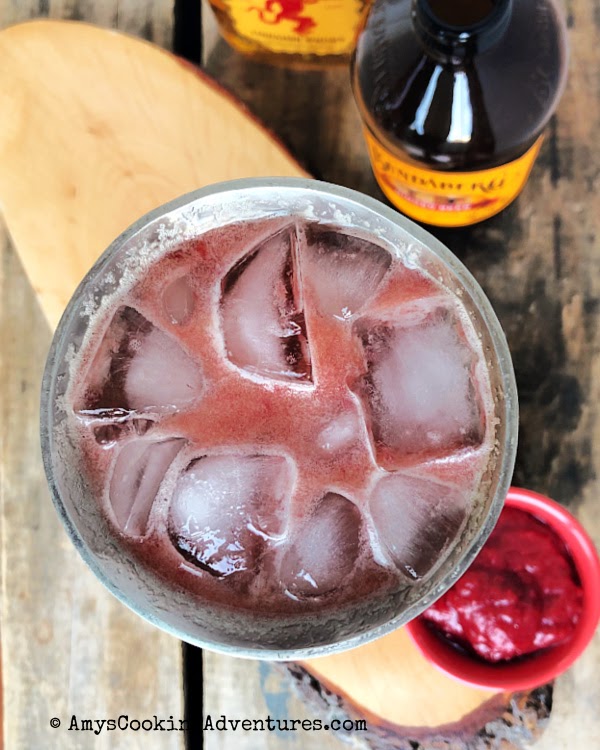 I don’t think I’ve mentioned it often, but I’m part of an online book club called Lit Happens.  Hosted on Facebook, it is totally low key with no requirement to blog about recipes and no penalty if you don’t participate for a month.

With  a lot going on in my personal life this month, I requested a very easy read from my large tbr pile: Around the World in 80 Cocktails.

Around the World in 80 Cocktails by Chad Parkhill
My rating: 5 of 5 stars

This was everything I'd hoped it would be! Fun cocktail recipes, fantastic pictures, and tons of fascinating historical info!

This read was everything I hoped it would be.  Each page turn takes the reader to a new destination with a stunning drawing of the cocktail, a brief history, and a recipe.

Then, the recipe I did make was inspired by one in the book, but not the actual recipe.   The inspiration was a version of a Slow Gin Fizz from post-prohibition Australia with a focus on local, in season ingredients, thus the rhubarb (which is also the only thing currently growing in my garden).

Never one to take a recipe at face value, and not a huge fan of gin, I decided to start researching other interpretations of this online and found one that included ginger beer.  The inclusion of ginger beer got me thinking about rhubarb pie and then I knew I was onto something.

I’m not going to lie.  There was a lot of trial and error (over a number of days) here.

First, I thought about adding Fireball to add a cinnamon note to the drink.

This version was no good.  The fireball overwhelmed everything and the compote was delicious but left too many stringy chunks behind.

Next, I pureed the compote and switched most of the fireball out for vodka (more like a moscow mule) and I was happy with the result.

Next, Hubs wanted to try one, but I ran out of vodka (it was nearly empty when I started - I usually only use it as “glue” for cake work).  He’s a fan of spiced rum, so we decided to try that in his drink and it was amazing!

Then, he suggested that I try the gin since I did have some on hand and since the original called for it.  In this version the drink almost took on a sour, lemonade-esque flavor.

Bottom line: any base alcohol (except fireball) will make a delightful but very different drink.  However, if your goal is rhubarb pie, stick with our favorite: spiced rum. 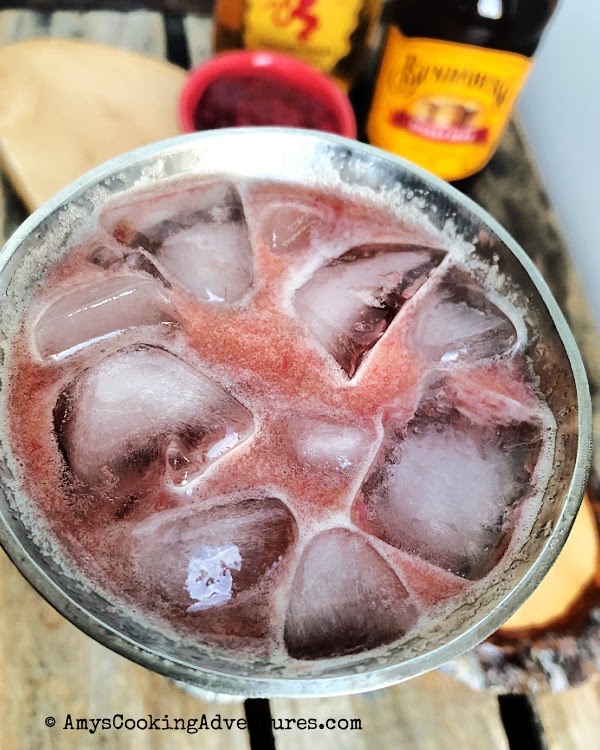 Fill a cup with ice.  Add the rum, fireball, and rhubarb compote.  Top  with ginger beer and stir to mix.

Place the rhubarb, brown sugar, salt and ¼ cup water in a small saucepan over medium heat.  Cook for 7-10 minutes or until the rhubarb is cooked through and broken down.  Set aside to cool.

Place the compote and remaining water in a blender and puree until smooth.