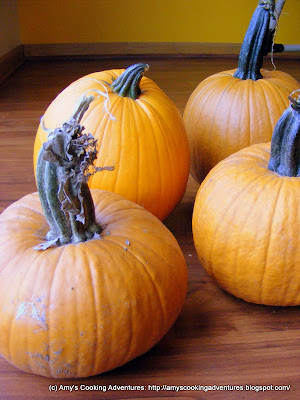 I’ve been hearing rumors of another pumpkin shortage this year (sadness!)  So that means it’s time to make our own puree again!
All you need are a few Sweet Pie Pumpkins.  Note that these are different than the ones you carve.  They are smaller and always labeled as Sweet Pumpkins or Pie Pumpkins.  You can usually find them at your grocery store or at your local Farmer’s Market.
I found these beauties at my Farmer’s Market.  Since they were selling for $2 each, I went through and found the biggest pumpkins to get the most bang for my buck.  For the following tutorial, I roasted the two larger pumpkins, which yielded 7 ¼ cups of pumpkin puree- that’s more than 3 ½ of the small cans of pumpkin puree.  So this is also a huge money savings.  I spent $4 on those two pumpkins, and 3 ½ cans of commercial puree would cost about $6.50.  So, let’s make some pumpkin puree!
Note: My photos may seems a little schizophrenic - it was a gloomy rainy day when I took these, so I had to rely on flash from time to time (try to look past it!)
Pumpkin Puree Tutorial
Recipe From Annie’s Eats 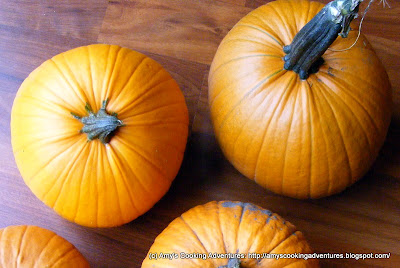 Preheat the oven to 350 degrees F.  And slice the tops off the Pie Pumpkins.  You can discard the tops. 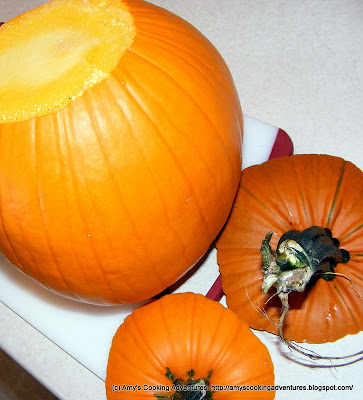 Slice each pumpkin in half and scoop out the guts (don’t throw away those seeds!  You can roast them after the pumpkins are done!) 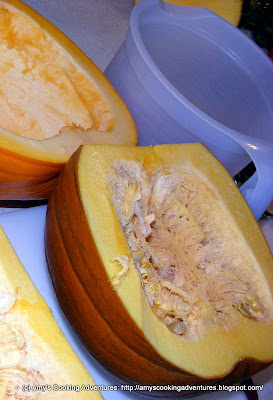 Place the pumpkins, cut side down, on a rimmed baking sheet.  Pour 1-2 cups of water into the pan, around the pumpkins. 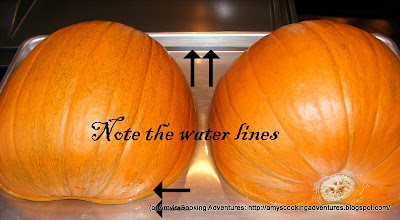 Bake the pumpkins for 60-90 minutes or until the flesh is tender and easily pierced by a fork.  The outer skin may also be dark and blistered.  Allow the pumpkins to cool for a bit. 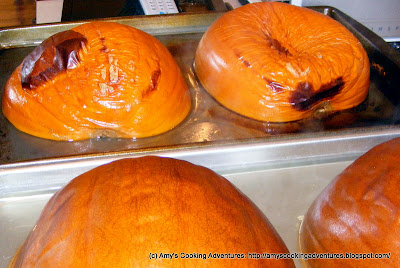 Then flip, and scoop the flesh out of the shells and into the bowl of a food processor. 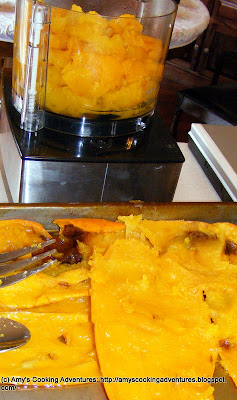 Puree the pumpkin in the bowl of a food processor  for 1-2 minutes of until very smooth. 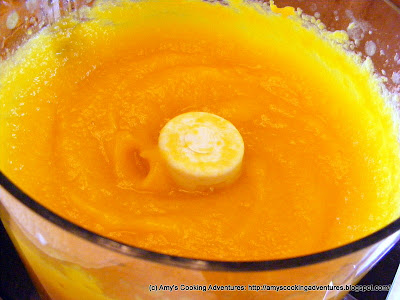 Place a large colander over a bowl and line it with a paper towel.  Pour the pumpkin puree into the lined colander to remove the excess water.  Removing the water will give the puree a consistency that is similar to store bought puree.  Let the puree sit in the colander for at least 15 minutes or up to an hour to let all that liquid drain off. 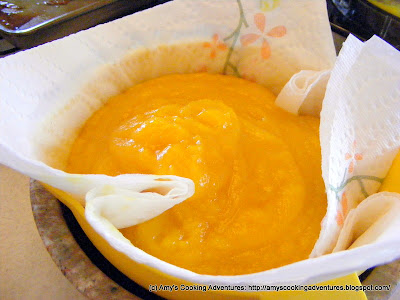 You can store the pumpkin puree in the refrigerator for 5 days or (as I prefer) by the cup in freezer bags (in the freezer) for 3-6 months. 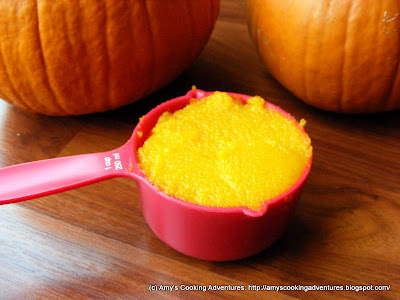