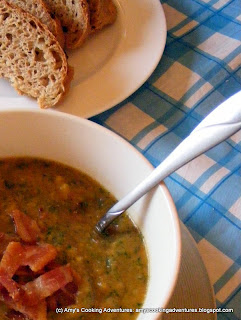 Last week was cold.  And rainy.  And icky.  It was most definitely a soup day.  Some people believe that soup is only for fall and winter.  Not me.  I think soup is also great on chilly, rainy days.
This soup absolutely hit the spot.  Warm, smooth, and chock full of glorious vegetables, and bacon, don’t forget the bacon.
I went ahead and pureed everything (except the bacon) with my immersion blender (if you don’t have one of these, I highly recommend it).  You can also puree your soup in a food processor, but frankly the idea of doing such a thing brings visions of scalding and blistered skin.  No thanks.
So, once you have acquired an immersion blender and it is rainy, make this soup.  It will make you feel warm and toasty.  And all the vegetables erase any guilt you may have about eating a couple pieces of bacon while you wait for the soup to cook. 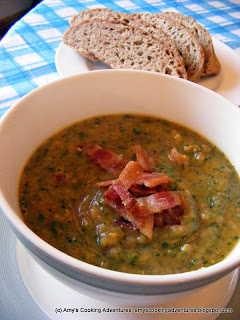 Sweet Potato Soup with Spinach and Bacon
Adapted from Someone Who Bakes
½ pound bacon
1 cup onion, diced
2 cloves garlic, minced
1 tsp dried thyme
1 (14.5 oz) can diced tomatoes, undrained
10 oz sweet potatoes, peeled and cut into bite size chunks
1 ¼ lb red potatoes, cut into bite size chunks
5 cups chicken stock
6 oz baby spinach
In a large soup pot, cook the bacon until crisp.  Remove, crumble, and set aside.
Add the onion to the bacon drippings in the pot and cook over medium high heat until softened and starting to brown, about 6 minutes.  Add the garlic and thyme and cook another minute.
Add the tomatoes (with juice) to the pot and stir until the juices have evaporated and the mixture is thickened.  Add in the potatoes and sweet potatoes and stir to combine.
Add the broth and bring to a boil.  Reduce heat and partially cover.  Simmer until the potatoes are tender, about 15 minutes.
Stir in the spinach and cook until wilted, about 2 minutes.
Carefully puree the mixture with an immersion blender, it does not have to be perfectly smooth.
Stir in the bacon pieces.  Season with salt and pepper and serve.
Makes 4-6 bowls of soup.
Enjoy!
Amy
bacon potatoes pureed vegetables soup spinach